We picked up this article in the Huffington Post about a gay African Penguin couple that are being separated so they can breed with females….

Down here on the Cape Point Route we are well aware that the African Penguins are an endangered species and that breeding is important. In fact in 2010 the African Penguins status on the International Red Data Book from vulnerable to endangered- meaning they are at “High risk of extinction in the wild.” We were delighted to see the “update” at the end of the article stating the pair would be re-united after breeding season. 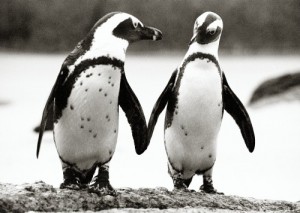 Here’s the article – let us know what you think!

The planned separation of a “gay” penguin couple at the Toronto Zoo is causing a commotion both among zoologists and the lesbian, gay, bisexual and transgender media.

As the Toronto Star is reporting, Buddy and Pedro have not only been inseparable, but have also shown signs of traditional mating behaviors. Bred in captivity, 10-year-old Pedro and Buddy, 20, came to Toronto from zoos in the U.S. as part of a popular African penguin exhibit which opened at the zoo in May, and formed a connection as members of a “bachelor flock,” according to the Star. “It’s a complicated issue, but they seem to be in a loving relationship of some sort,” said Joe Torzsok, chair of the Toronto zoo board.

But sadly, even though the pair frequently engage in “courtship and mating behaviors that females and males would do,” according to one keeper, zoo officials say they intend to separate the birds from each other and pair them with females for breeding, as African penguins are an endangered species.

Same-sex companionship among penguins is actually quite common. In 2009, Z and Vielpunkt, two male Humboldt penguins at Germany’s Bremerhaven Zoo, became the proud parents of a healthy penguin chick hatched from an egg fertilized by another penguin couple. Another such pair at China’s Polarland Zoo was even given a wedding celebration, as The Sun is reporting.

And, as LiveScience reports, homosexuality has been documented in more than 450 species of vertebrates, “signaling that sexual preference is biologically determined in animals.”

UPDATE: Bill Rapley, executive director for conservation, education and wildlife at the Toronto Zoo, now tells the National Post that Pedro and Buddy’s separation will only last as long as it takes for them to inseminate their respective female partners. Once breeding season is up, Pedro and Buddy will be able to reunite.

Watch a video about Pedro and Buddy, as well as some other intriguing cases of “gay” animals, on the Huffington Post link here.

Gay Penguins in the Past!

We recall the huge outcry over the Homosexual Humboldt penguins being separated and paired off with “Swedish Chicks” in Germany back in 2005! In fact we dug out an old cartoon that Boulders Beach Lodge made in response to the outcry of the situation. The update in Germany is that the male couples are hatching the chicks and caring for them! Read more…

Boulders Beach in Simon’s Town is home to the largest land based colony of African Penguins. Boulders Beach is part of Table Mountain National Park and the entry fee for adults is R45 and for children under 12 the fee is R20.

Boulders Beach is a popular stop with families or on a day tour of the Cape Peninsula but it is worth staying longer in the area to truly appreciate the penguins and the surrounding environment.

Contact Cape Point Route for area information on 021 782 9356 or inquire here for accommodation, restaurants, tours, activities and more in the area.

This entry was posted in Wildlife and tagged African Penguins, Gay penguins, Homosexuality in animals, Penguins. Bookmark the permalink.