Chacma Baboons of the Cape Peninsula

Chacma Baboons are commonly sighted by visitors to the Cape Point Route and their human like behaviour is extremely popular for visitors trying to get a shot on their cameras to take home as a memento of “wildlife in Africa”.  We relate closely to their behaviour and characteristics, and become enthralled with their natures (in particular mothers and babies!).

However there is an ongoing conflict between humans and wildlife.  As human expansion increases, foraging grounds decrease and the natural environment of the baboons decreases, making it harder for these intelligent creatures to survive. 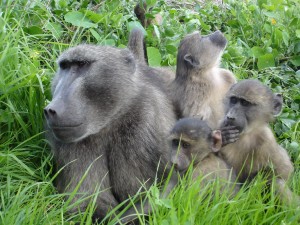 Baboons are the largest member of the monkey family.

The Chacma Baboon, also known as the Cape Baboon, is, like all other baboons, from the Old World monkey family. With a body length of up to 115 cm and a weight from 15 to 31 kg, it is among the largest and heaviest baboon species. The Chacma is generally dark brown to gray in color, with a patch of rough hair on the nape of its neck. 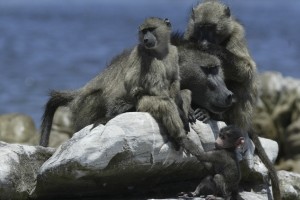 Unlike the northern baboon species (the Guinea, Hamadryas, and Olive Baboons), Chacma males do not have a mane. Perhaps the most distinctive feature of this baboon is its long, downward sloping face. Males can have canine teeth as long as 2 inches (longer than a lion’s canine teeth). Baboons are sexually dimorphic, males being considerably larger than females.

The Chacma Baboon is found in most of southern Africa, ranging from South Africa north to Angola, Zambia, and Mozambique. Size and color vary within that range. The Cape Chacma from southern South Africa is a large, heavy, dark brown baboon with black feet.  The spend most of the time on the ground and moving around in search of food. They sometimes spend the nights on rocky outcrops. 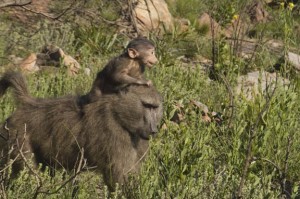 Chacma baboons traditionally eat grass,roots, tubers, fruits, nuts, invertebrates, small birds and mammals, and crustaceans when they live near the coast. Chacma baboons are omnivores and will happily eat human food if given the opportunity! Please do not feed the baboons! 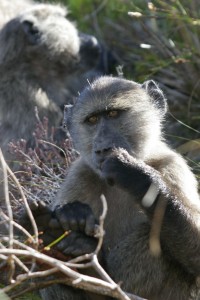 Chacmas usually live in social groups composed of multiple adult males, adult females, and their offspring. Occasionally, however, very small groups form that include only a single adult male and several adult females.  Chacma troops are characterized by a dominance hierarchy. Female ranking within the troop is inherited through the mother and remains quite fixed, while male ranking is tenuous and changes often. 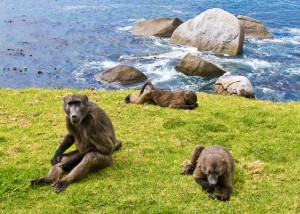 Chacmas are unusual among baboons in that neither males nor females form strong relationships with members of the same sex. Instead, the strongest social bonds are often between unrelated adult males and females. Infanticide is also common compared to other baboons species, as newly dominant males will often attempt to kill young baboons sired by the previously dominant male. Baboon troops possess a complex group behavior and communicate by means of body attitudes, facial expressions, sounds/calls and touch.

Females give birth to a single young after a gestation period of about 6 months.  Couples will often stay together to raise an infant and males will even become a foster parent if the mother is killed. Baboons are unique in that all the members of the troop or family are related in some way. Baboons live to be about 30 years of age. 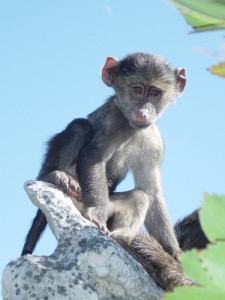 The Chacma baboon is widespread and does not rank among threatened animal species. However, in some confined locations such as South Africa’s Southern Cape Peninsula, local populations are dwindling due to habitat loss. Some troops have become a suburban menace, overturning trash cans and entering houses in their search for food. These animals can be aggressive and dangerous, such negative encounters have resulted in frustrated local residents resorting to hunting them. It is thought that this isolated population will face extinction within 10 years.

The Chacma is considered to be potentially threatened if populations are not monitored. The only area in South Africa where they are monitored is in the Cape Peninsula where they are protected. Observations by those working hands-on in South Africa’s rehabilitation centres, have found that this species is damaged by human intervention; troop structures are influenced and over the years there has been a significant loss in numbers. Because they live near human habitats, baboons are shot, poisoned, electrocuted, run over and captured for the pet industry, research laboratories and muthi (medicine)

PLEASE CLICK HERE to read more about why never ever to feed baboons!

This entry was posted in Wildlife and tagged Baboons, Cape Baboons, Chacma Baboons. Bookmark the permalink.