Cape Point Route is proud to introduce you to one of the Cape Peninsula’s celebrities – Franck Dangereux. You may have seen him on morning TV recently (SABC Expresso Show); you may have bought his book (Feast), you may have attended one of his cooking demonstrations and you may have tasted his cooking at the Foodbarn Restaurant…. 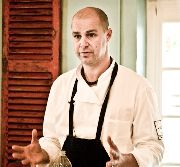 But who is Franck Dangereux besides being the chef and owner of the Foodbarn at Noordhoek Farm Village? Franck Dangereux is not a myth or a Food God, he is a regular guy with passions and dreams, he just happens to really love cooking and be really good at it!

Franck was born in France (Cannes) and born in food. Every holiday involved a family feast and not only was his mother a phenomenal cook but so were his grandmothers. They taught Franck about going to the market

and smelling the produce and choosing the finest ingredients. Franck says his earliest memories were strongly connected to food… “ My grandmother who lived in Nice cooked delicious food for us – rabbit with red wine, cep mushrooms and prunes. Asparagus with a vinegary, creamy sauce, strawberries with homemade custard.”

By his early teens he knew that he wanted

to work with food and at 15 he started at the Nice Hotel School which was incredibly tough at the time. He trained at the Hotel School for 3 years and then trained with Roger Verge of Moulin de Mougins. By the age of 18 he started working at Michelin 3-star restaurants in Paris, and has been working ever since. As a young chef Franck was fascinated with experimenting with ingredients 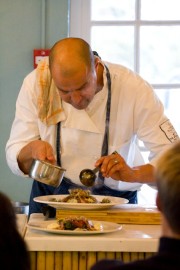 and the adventure was about trying different combinations, by his own admission some dishes “were disgusting!”

Franck travelled to St Bart in the Caribbean where he started a laid back restaurant at the top of a hill. Whilst working in the Caribbean he came to South Africa on a holiday in 1987 to see an uncle he barely knew and was blown away by the country. It was his first visit to South Africa and the people, the mountain, the climate and the light delighted and enthralled Franck so much that he stayed for an entire month.

Franck returned to the Caribbean, and also worked in Northern Africa but South Africa and Cape Town in particular stayed prominently in his mind.

After Nelson Mandela’s release, he felt that there were exciting times and opportunities in South Africa and he made his way back to his uncle.

Franck started working with Franck Swainston at Constantia Uitsig. For Franck it was a new phase of his adventures as a chef. There was gastronomical revolution happening in South Africa and Franck’s enjoyment of being in the kitchen and

working with about 10 other chefs as part of the movement was a quest. Franck had grown up and his pursuit in the world of food was to achieve perfection and to cook with sensibility, simplifying his dishes to the perfect combinations. It is no surprise that during his 10 years at La Colombe he was placed 28th on the list of the world’s best restaurants. Franck is humble though and despite his achievements, numerous awards and an elevated status 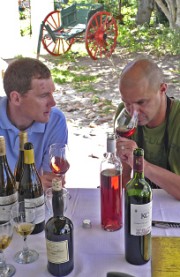 with a huge fan base and following, for Franck the pleasure revolved around the enjoyment of cooking and having happy patrons.

Franck’s next adventure was joining up with Pete de Bruin and starting the Foodbarn at Noordhoek Farm Village. Linked to a stage in his personal life, Franck had met his wife and with 2 boys (now 9 and 12 years old) and a lifestyle that Franck had always dreamed of, the move to Noordhoek was and still is an exciting challenge. The Foodbarn was partly motivated by spending time with his family; partly motivated by riding and training his horses and partly based on a new phase of his career.

Having left the world of Fine Dining,

Franck wanted to bring his experience and food savvy and introduce better food to a broader audience of people. As Franck says, “I want fine dining brought to the streets – the more people know about the ingredients of a dish and the more exposure people have to better food, the more people will want to eat well.” Franck’s latest quest is to share his knowledge with other people and create a culture of unpretentious but fine dining. 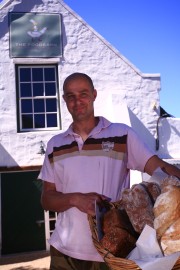 Franck has shared this knowledge with his passionate team and staff and is sharing that with the public. Do yourself a favour and book a cooking demonstration at the Foodbarn with Franck.

Sharing is caring but have no fear, he will still be waking up in the middle of the night with new ideas for an exciting combination for a new dish so keep visiting the Foodbarn, as the menu is continuously changing with the seasons and the “midnight dishes” from Franck’s head. The Foodbarn is very conscious about local support and all ingredients are sourced locally where possible (with a maximum 100km radius of Cape Town). Franck believes in supporting the people who work around us for the long term sustainability of our people and our planet. 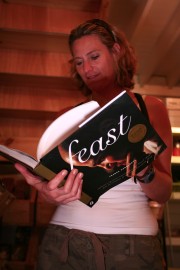 Franck Dangereux – chef extraordinaire is loving life in Noordhoek and at Noordhoek Farm Village. He spends time with his family, he rides and trains his horses, he lives 2 minutes from work and he loves what he does and loves sharing that. Perhaps Franck’s greatest challenge is one that we all face in our day to day living and that is time – the currency of time is more valuable than money in so many ways to Franck and like all of us real people doing real things, creating time to enjoy the things we love and not rush is what life is all about.

Cape Point Route are big fans of Franck and the Foodbarn and hope you will come to Noordhoek and enjoy the delights of Franck’s skill and explore the area at the same time.

The Foodbarn Restaurant Hours are:

Sunday and Monday: Lunch only

Tuesday to Saturday: Lunch and Dinner

The Foodbarn Bakery and Deli:

Every Wednesday evening – free with your dinner booking. This is an interactive cooking class and food theatre all in one.

Many of these recipes will be loaded on the Foodbarn website and cooking clips from Expresso show will soon be on www.expressoshow.mobi.

The winter special is based on a wine pairing and must be one of the best value dining experiences in the Cape. Currently there is a Steenberg Estate pairing with all dishes. CPR recommends the 4 course special!

Once a month the Foodbarn hosts a winter wine evening – it features 4 courses with food paired to a selected wine estate. Evenings start at 7pm and cost R250 per person. Book early – they are extremely popular.