Cape Peninsula – Then and Now

Here at Cape Point Route have been reminiscing about the times been and gone.  So often, it isn’t until we look back on actual photographic evidence that we remember that life wasn’t always the way we know it today.

We hope you have as much fun as we did looking back on some photos that really capture the past; our favourites being the old fashioned outfits and vehicles.

The bronze leopard sculpture in Hout Bay was sculptured by Ivan Milford-Barberton. Completed in 1963, it was placed on its pedestal on 14th March that year by the Divisional Council. The sculpture is a memorial to the many wild animals that once roamed the mountains of the peninsula. The last leopard seen in Hout Bay was in 1937 on Little Lion’s Head.

The stunning scenic views from Chapman’s Peak (affectionately known as Chappies) have remained since the opening of Chapman’s Peak Drive to the public on 6 May 1922.

This route was originally known as the Hout Bay-Noorde Hoek road and was of immense importance for local residents and businesses; so when rockfalls in January 2000 caused its closure, the public rallied for it’s reopening.

This resulted in extensive safety measures being put into place to prevent any further fatalities.  Project engineers constructed a 40 meter long curved cantilever canopy, arching over both lanes on a tight bend at the confluence of three gullies, as well as catch fences that drape along the sides of the rock face as rock fall protection measures.

Did you know?  Chappies has a total of 114 curves along it’s 9 kilometer route. 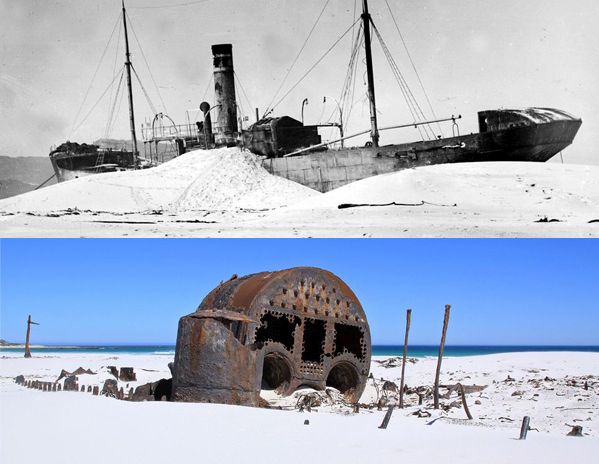 Captaining a 665 ton schooner rigged steamship back in the 1900’s was no easy task. Especially when trying to navigate the notorious Cape of Storms!

Visibility was poor, with strong north-west winds and high seas when the SS Kakapo rounded Chapman’s Peak.  The Captain (who had received his captain’s ticket just months before), mistook it for Cape Point and gave orders to turn hard to port while maintaining full speed ahead. Needless to say, the fated SS Kakapo ploughed straight onto Noordhoek Beach.  Amazingly no lives were lost.

Did you know? Legend has it that the Captain was so mortified by the loss of his ship that he refused to leave, living on board for 3 years until he was eventually escorted off the ship and taken to a mental facility.

Slangkop Lighthouse in Kommetjie is the tallest cast iron lighthouse in South Africa and has been burning brightly since 1914, when it was commissioned by the then Governor of the Cape to safeguard against shipwrecks on the rocky shore.  The boardwalk towards the lighthouse makes a lovely evening stroll to watch the sun set on the horizon.

Did you know?  Slangkop Lighthouse emits four flashes  every 30 seconds.

If you were visiting Cape Point back in the 1920’s you would have to park your car at the base of the hill, and take a diesel bus to the top.  The bus ran this route for the last time in December 1996 when the Flying Dutchman Funicular (or Cape Point Funicular) replaced it, being a more environmentally friendly (and novel!) way of getting to the top.

Did you know?  The Flying Dutchman was the first commercial funicular railway of its kind in Africa.

The original lighthouse was built in 1859 on Da Gama Peak, the summit of Cape Point, 249m above sea level. It still stands here and is now used as a centralized monitoring point for all the lighthouses in South Africa. It was decommissioned in 1919 in favour of the new lower lighthouse which was more visible when thick mist and fog obscured the light flashes. The newer lighthouse, built in 1914, is the most powerful on the South African coast. It emits three flashes in a group every 30 seconds and revolves.

Simon’s Town was originally named Simon’s Vlek after Simon van der Stel, the Dutch governor of the Cape Colony between 1677 and 1699, who earmarked it as a safe winter harbour during the months of May to September for which it was finally proclaimed in 1741.

Progress may have come slowly to Simon’s Town, but the town grew rapidly when it became a Royal Naval Base and the home of the South Atlantic Squadron under the second British occupation of the Cape in 1806.

Did you know?: Able Seaman Just Nuisance was the only dog ever to be enlisted in the Royal Navy after the sailors took a shine to him.  He “served” in the navy between 1939 and 1944, and you can see a statue of him which was erected in his memory in Jubilee Square in 1985.

Fish Hoek is a seaside village surrounded by rugged mountains and boasts one of the safest swimming beaches in Cape Town. Fish Hoek is a glorious bay with a beautiful white sandy beach, with colourful Victorian bathing boxes that add a festive flavour.

Did you know?  Trek fishing has taken place in Fish Hoek since the early days of the European settlement.  The word “Trek” derives from the Dutch word for pull.

Life as a Kalk Bay fisherman in the late 1800’s was pretty harsh.  The strain of rowing, hauling the boats above the high water mark on their return, and the carrying of loads of sand ballast took a heavy toll on the fishermen.

Did you know?: The name Kalk Bay is derived from the Dutch word for “lime”.  Limekilns were set up to produce kalk from the shore’s shell deposits, which were then set to Cape Town via ox wagons.  Lime was used in the construction of buildings, and it is this that gives so many of Cape Town’s houses their white-walled appearance.

St. James, which stretches only 1.5 km, is a suburb which is steeped in history. Some of the houses were already in existence in 1883, and most had thatched roofs and were built of stone, plaster and limestone. Colourful Victorian bathing boxes are the trademark of St. James, and the start of grand stone houses that line the road to Muizenberg.

Muizenberg beach remained popular for it’s safe swimming and good surfing. Surfers’ Corner is considered the birthplace of surfing in South Africa – legend has it that a visiting Australian showed the locals how it was done in around 1910.

Did you know? The clocktower at the railway stationhouse, built in 1913, marks the start of Muizenberg’s Historical Mile along Main Road. It was the extension of the railway line from Wynberg in 1822 that stimulated the area’s development as a seaside resort. 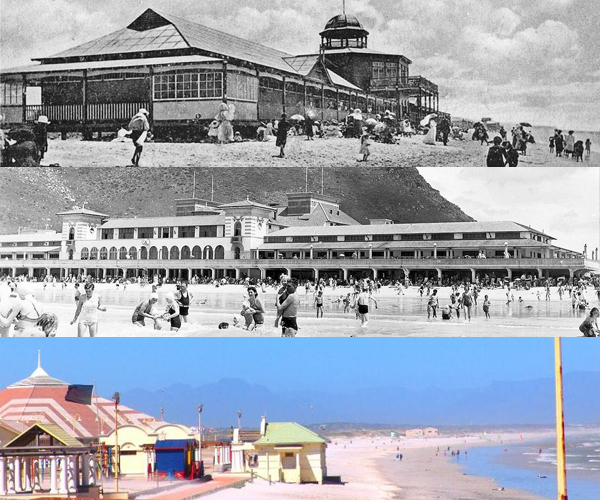 The Cape Town – Simon’s Town line is not the oldest in South Africa, however work began on the section to Wynberg in December 1864.  The train line was extended to Muizenberg in 1882 and in 1889 work began to take the line through to Simon’s Town. 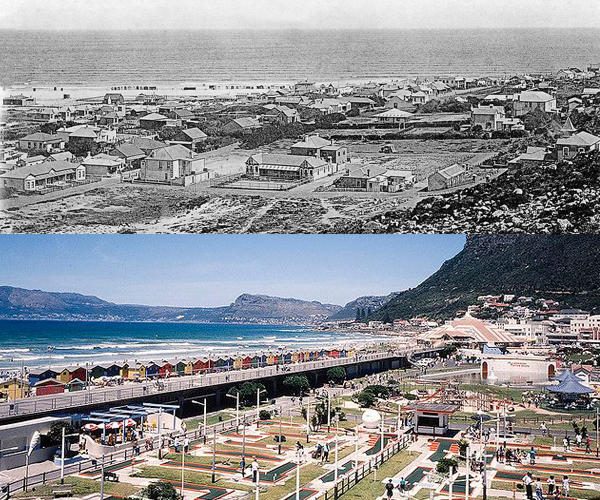 Then & Now is a collection of past and present, before and after photos taken on the Cape Point Route. Thanks to those who submitted images and to the Town Museums of the south peninsula who collate, archive and preserve many of these images amongst other artifacts and exhibitions- visit and support them to preserve the history of the area. Enjoy memory lane!

We would love to build on this collection so please feel free to submit your own then and now photos for sharing by emailing your images to: info@capepointroute.co.za.

Join us in Conversation

This entry was posted in History. Bookmark the permalink.