Welcome to ‘the penguin kingdom’ where, with their cartoon good looks, cute antics, cool disposition and celebrated ‘happy feet’, there’s plenty to celebrate. For the record, penguins are a group of aquatic, flightless birds. They live almost exclusively in the southern hemisphere. 25 April is observed as World Penguin Day. The day was created to promote the health and conservation of these amazing creatures.

Here are some interesting penguin facts for World Penguin Day.

It is generally agreed by scientists that there are 17 species of penguins alive today, all of which live in the southern half of the globe. The most northerly penguins are Galapagos penguins which occasionally poke their heads north of the equator. 13 of these species are threatened or endangered.

Penguins are one of about 40 species of flightless birds. Other flightless birds include rheas, cassowaries, kiwis, ostriches and emus. While they can’t fly through the air with their flippers, many penguin species take to the air when they leap from the water onto the ice. Just before taking flight, they release air bubbles from their feathers. This cuts the drag on their bodies, allowing them to double or triple their swimming speed quickly and launch into the air.

Like other birds, penguins don’t have teeth. Instead they use their beak to grab and hold wiggling prey and have backward-facing fleshy spines that line the inside of their mouths & beak to help them get a good grip. These help them guide their fishy meals down their throat.

Penguins are carnivores: they feed on fish, squid, crabs, krill and other seafood they catch while swimming. During the summer, an active, medium-sized penguin will eat about 1 kilogram of food each day

Penguin nesting areas are called “rookeries” and may contain thousands of pairs of birds. Each penguin has a distinct call, which allows individual penguins to find their mates and chicks even in the largest groups. (and they are really good listeners!)

Eating so much seafood means drinking a lot of saltwater, but penguins have a way to remove it. The supraorbital gland, located just above their eye, filters salt from their bloodstream, which is then excreted through the bill—or by sneezing! But this doesn’t mean they chug seawater to quench their thirst: penguins drink meltwater from pools and streams and eat snow for their hydration fix.

Another adaptive gland—the oil (also called preen) gland—produces waterproofing oil. Penguins spread this across their feathers to insulate their bodies and reduce friction when they glide through the water. Penguins spend several hours a day preening or caring for their feathers. If penguins don’t keep them well maintained, their feathers would not stay waterproof.

Penguins molt, or lose their feathers, once a year – the official term is a “catastrophic molt”. They always molt on land or ice and until they grow new waterproof coats, they are unable to go into the water. Most birds molt a few at a time throughout the year, but penguins lose them all at once. They can’t swim and fish without feathers, so they fatten themselves up beforehand to survive the 2–3 weeks it takes to replace them as they can lose about half their body weight during this time.

How can you help? 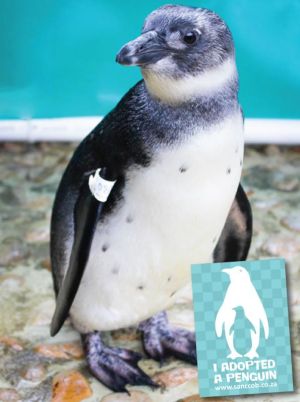 Help save this highly endangered species by ‘adopting’ a penguin today.
SANCCOB’s adoption programme is a pay-it-forward system. You make a donation towards our work by adopting and naming an African penguin that has, or will be, rehabilitated and released back into the wild by our dedicated staff. ‘Adopt’ and name a wild penguin – or choose one of SANCCOB’s home pen birds which live permanently at SANCCOB because they cannot survive in the wild …

Your donation helps cover the cost of fish, medication, water and other essentials. Because SANCCOB’s objective is to release as many of our rescued seabirds back into the wild as possible, you will not be able to visit or view ‘your’ penguin during rehabilitation, or track its movements after release.

You will however play a vital role in saving an African penguin … and give your adopted bird the chance to live a natural life in the wild, where it belongs.

Cape Point Route has been celebrating penguins since 2004…read our penguin journey here and have a giggle at some of our penguin antics in pictures.

Visit Boulders Beach African Penguin colony in Simon’s Town to see these amazing birds.
Stay near the penguins in a choice of Simon’s Town Accommodation establishments.
Sea Kayak to the penguins – a fun activity on the water. 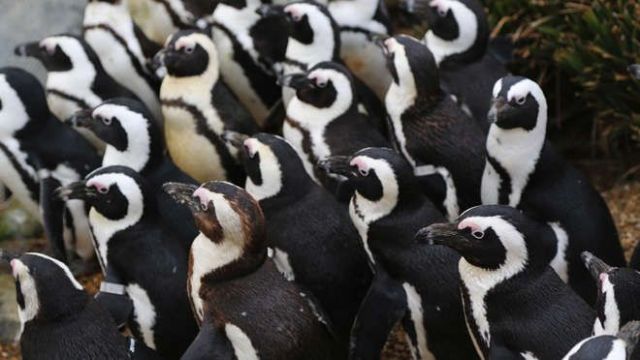