Cape Point Route wishes the PROMISES FOR PENGUINS team a fantastic waddling week as they journey from Gansbaai to Boulders Beach . Starting date 23 May 2011 and finishing on the 28 May 2011 at Boulders Beach in Simon’s Town – all to raise the awareness of the plight of the African Penguin and it’s status as an endangered animal. 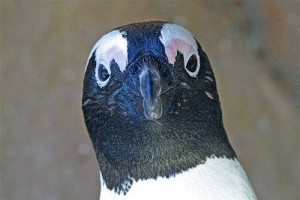 Please support the Animal Keepers Association Africa in this worth cause – pledge your support for the survival of the African Penguin (not your money!)- details below. Or you can show support by joining the waddlers on the route from Gansbaai to Simon’s Town.

On the Final Day- Sat 28 May – they will be walking from Surfer’s Corner to Boulders Beach Lodge, starting at 8am. Hope to see ya’ll there! (Dress in black and white and pledge your support and penguin promise on www.penguinpromises.com)

This Campaign will raise awareness of the plight of our very own African Penguin which is only found on the Southern African Coastline, and has recently been declared endangered. This Penguin will be extinct in fifteen years if together we don’t do something. We humans caused the problem so let’s fix it. 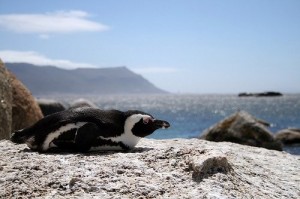 In keeping with the world wide call of “What can Zoos and Aquaria do to promote global conservation awareness”, the AKAA has initiated an annual awareness program which will focus on one Endangered Species per year.

To spread the Penguin Promises message and inspire relevant social behaviour change, a couple of AKAA members and possibly a SANCCOB representative, will be waddling 150kms down the East coast of South Africa from Dyer Island, Gaansbaai, to Boulders in Simonstown, Cape Town. The significance of this walk is that it starts and ends at two of the main breeding colonies for the African Penguin and takes in the area of coastline frequented by these birds for feeding. Join us on route. Check the website www.penguinpromises.com for details.

In support of this epic voyage, a dedicated portal has been created under the banner of the AKAA, whereby the entire event can be followed live and promises to help the Penguins can be made. The important fact here is that the pledges we are asking for are not money but ACTIONS, hence the slogan:

“We don’t want your Money Honey, we want your Love”. 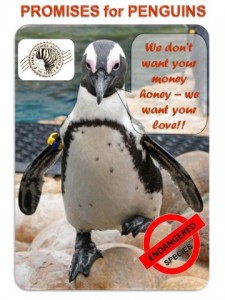 How can you help? We invite you to visit: www.penguinpromises.com,

Why don’t you choose a promise (or create your own), and pledge a promise today at: sms 34008 with the keyword “Penguin (followed by your pledge)” – Sms charged at R2.00.

This campaign will be scientifically evaluated to ensure that it meets its objectives, and the research will help to inform future projects. 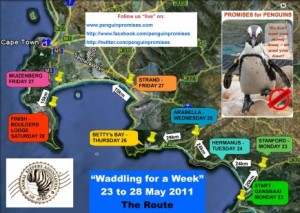 Please pledge a promise or join the waddlers on the route – or contact Cape Point Route for the latest information on the waddlers. info@capepointroute.co.za. Tel 021 782 9356

This entry was posted in Cause and tagged African Penguins, Penguin promises, waddle for a week. Bookmark the permalink.