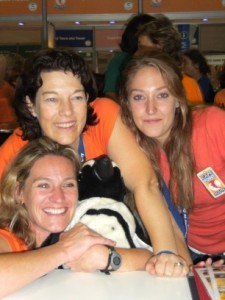 In fact the AKAA love penguins so much they are waddling for a week to raise awareness for the African Penguin.
The Penguin Promises Waddle for a Week is not a fundraising initiative. This a campaign focused on lifestyle and behaviour change that will have a positive impact on the environment.

Join the WADDLE with them on the final day

Where: Muizenberg (Surfer’s Corner 9am) to Simonstown (Boulder’s )

Bring: a spirit of fun! friends, families, walk your dogs

Tell: the world how important this species is!

See:   www.penguinpromises.com for more info on African penguins and Waddle 2012

PENGUIN PROMISES WADDLE FOR A WEEK 2012

WHAT YOU CAN DO:

This entry was posted in Cause and tagged African Penguins, Boulders Beach, Penguin promises, Pledge a penguin promise, waddle for a week. Bookmark the permalink.