What’s in a name?  A cyclist popped into our office and asked us how Smitswinkel Bay got its’ name? 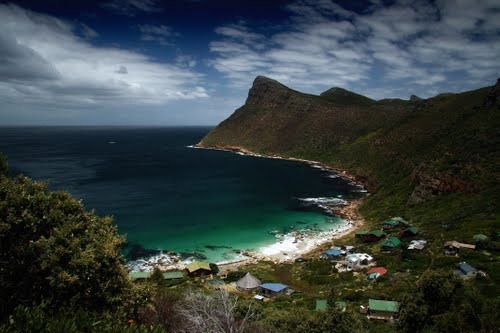 The translation of Smitswinkel  means Smith’s shop (as in blacksmith) and it seems as though the beautiful little bay was named after two rocks that jut out of the sea which resemble an anvil and bellow.  It has also been suggested that the bay was on Smith’s Farm (although we are not sure who Smith is!) 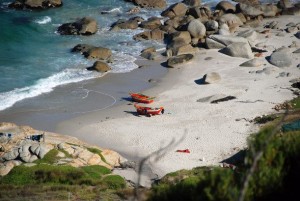 Smitswinkel Bay is on the scenic coastal drive between Simon’ s Town and the entrance to the Cape Point Nature Reserve.  It is a picturesque little bay which is relatively inaccessible. There are a few privately owned houses but no road.  This is probably one of the only enclave’s in the Cape where the holiday shacks are really shacks.  There is no electricity or cell-phone reception so “Smits” as it is popularly known retains the magic of a long gone forgotten era . 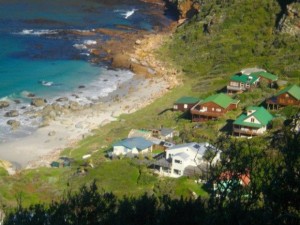 I suspect I will be extremely unpopular with the local Smitswinkel Bay residents and home owners for posting this as they try as hard as possible to keep Smits a secret and there are no prizes for guessing why.  Sorry guys but good things should also be shared! 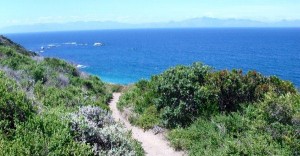 There is a parking place off the M4 before you drive round the corner to Cape Point.  From there there is a steep zig-zag footpath to get down to the beach. The walk takes 15 – 20 minutes and is about 120m – a bit of effort required but it is worth it!  Despite the “winkel” in the name, there is NO SHOP so day visitors need to carry in everything they need. 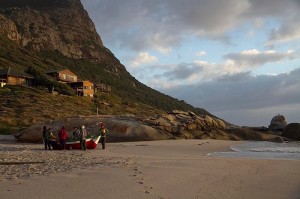 As the beach is reached only by foot, it is usually uncrowded with Judas Peak watching over it much like the Sentinel does for Hout Bay. Smits is popular for snorkelling, diving and fishing (angling!) and you’ll find people playing beach bats and Frisbee and it is lovely for a beach picnic. You can also do a small bit of boulder hopping at low tide and find the caves and grottos on the south side of the beach.  Smits is well protected from the summer south-easterly wind too.  When the fishermen come in with a catch, there is lots of activity on the beach and everyone gets involved to help!  (One of the residents has a fish trekking licence). 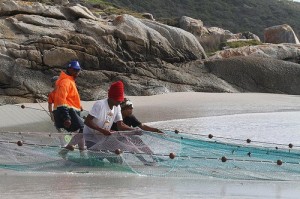 The Smits reef is extremely popular with scuba divers as there are 5 wrecks in the bay. They were deliberately sunk by the Navy in the 1970’s and they have formed an artificial reef teeming with a variety of fish, starfish and marine life.  The wrecks are the SAS Good Hope, SAS Transvaal (both frigates);  the Princess Elizabeth & the Oratavia (both fishing trawlers) and a diamond dredge called the Rockeater! The wrecks are covered with plenty of soft corals, sponges and sea fans and you may even see a big stingray. It’s a deep multi-level dive averaging 30- 36 metres and accessible by boat. Contact Pisces Divers. 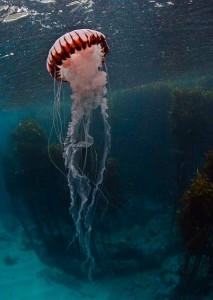 Smitswinkel Bay on the Cape Peninsula is a magical little bay and there is a popular viewpoint from the M4 for visitors on a day tour to Cape Point. Smits is well photographed due to it’s beauty. 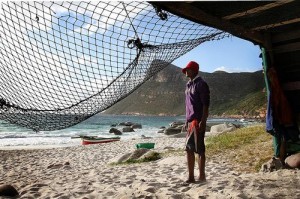