Re-opening of the Two Oceans Restaurant

On a wild and wet Cape of Storms day, we headed to the south-western tip of Africa for the re-opening of the Two Oceans Restaurant at Cape Point. On route we were treated to baboons on the roadside and as we arrived in the Cape of Good Hope section of the reserve the sun bravely fought its way through the clouds as if to brag!

The 16 year old restaurant has always had spectacular views but the spectacle has been vastly improved with the revamp. The tone is neutral beach colours with a nautical element. The initial display is a “kelp” screen constructed from reclaimed steel downpipes.  The ceiling was inspired by the rib cage of a whale but also reflects the movement of the wind – which can be notorious at Cape Point! We loved the glass chandelier above the sushi bar made up of glass, shells & bone. 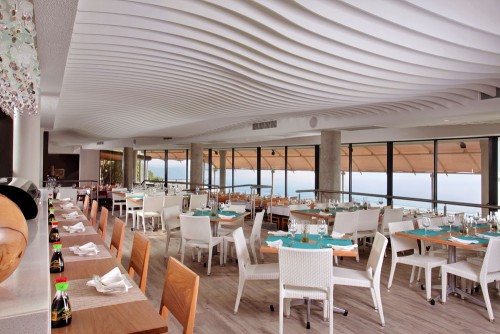 New vintage-styled Cape Furniture with bleached timber and wicker chairs juxtaposes the sea-washed flooring with a combination of rough and smooth, angles and flow.

Andrew Constandakis, one of the directors of the restaurant welcomed guests, followed by Paddy Gordon from SANParks (custodians of the park) who eloquently highlighted the meet, greet and eat factor associated with the Two Oceans Restaurant. Jeremy Webb (director of the Two Oceans Restaurant) gave his customary enthusiastic speech and led the staff to the floor in a spontaneous rendition of Shosholoza song and dance.  MEC Alan Winde (Minister of Finance, Economic Development & Tourism) highlighted the need for growth in the tourism sector for the region – pointing out the target of growing the tourism segment from 10% to 15% of the regional economy.

Congratulations to everyone involved in the project and all the partners in the project – Cape Point Partnership (Tolcon, Thebe Tourism group, Two Oceans Restaurant) SANParks, and Source Brand Architects on a job well done! 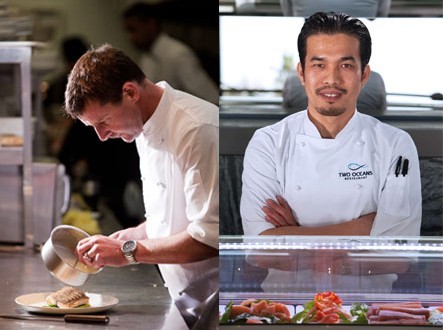 Then it was with great glee that we were seated to enjoy the canapés and sushi provided by executive chef Phil Alcock and his team with Thai Head Sushi Chef Sarawut Sukkowplang taking a humble bow.  The food was delicious and service superb and friendly. I took a quick glance at the menu and seafood remains the speciality – crayfish, prawns, calamari, mussels, paella, and the signature seafood platter feature prominently on the menu but there are choices for carnivores and vegetarians too!  Sushi lovers will LOVE the sushi bar which has pride of place as you enter the restaurant (right under our favourite chandelier!) 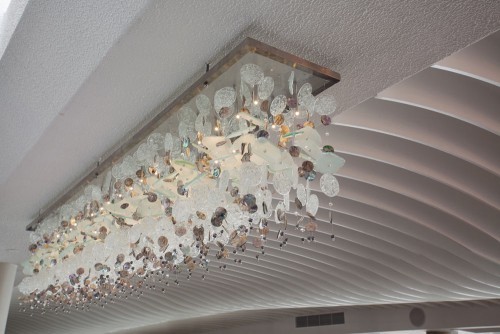 The revamped Two Oceans Restaurant has certainly added even more to the visitor experience at Cape Point- one of the major tourist attractions in Cape Town and on the Cape Point Route.  You won’t be disappointed, and just in case… did I mention the views?