A light motor vehicle would pay R33 for a one-way trip, while a motorbike would pay R22. Buses would be charged R335 for a single trip, and minibus taxis with public transport registration R17. Frequent users would receive discounts, with cars paying as little as R6 a trip. Ambulances, fire trucks and rescue vehicles with the appropriate licences would be exempt from toll fees. See below for all toll fees. 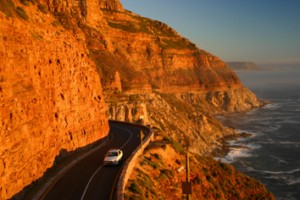 Chapman’s Peak Drive winds it way between Noordhoek and Hout Bay. Situated on the Atlantic Coast, at the south-western tip of South Africa, it is one of the most spectacular marine drives anywhere in the world.

The 9km route, with its 114 curves, skirts the rocky coastline of Chapman’s Peak, the 593m high southerly extension of Constantia Berg. The drive offers stunning 180° views with many areas along the route where you can stop and take in the scenery or sit down for a relaxing picnic. 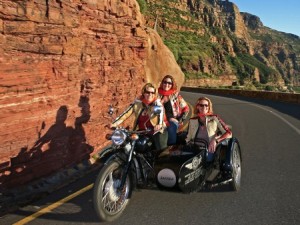 Experience It
Chapman’s Peak and the surrounding areas offer local and foreign visitors a myriad of things to do, and forms the gateway between Cape Town and the South Peninsula.

The route starts at the picturesque fishing harbour of Hout Bay and the climb winds steeply up to Chapman’s Point, revealing breathtaking views of the sandy bays down below, until the road reaches lower levels again at Noordhoek.

Initially constructed during the First World War, Chapman’s Peak Drive has now implemented rock-fall protection measures that were selected on the basis of what is considered to be best international practice and consist of a half tunnel, catch fences, slope stabilisation and canopy structures. In 2004, Chapman’s Peak Drive received an excellence award for rock fall protection. 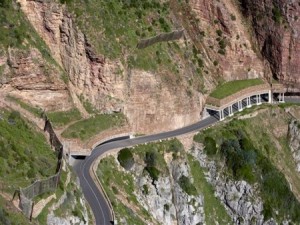 If you are a regular individual user on this spectacular route and travel more than 3 times per month, it’s worth signing up for a Chapman’s Peak Drive Frequent User Card to get discounted rates. The more you use Chapman’s Peak Drive, the cheaper it gets!