The South African Post Office celebrates the 100th anniversary year of the first airmail delivery in South Africa which involved the towns of Kenilworth and Muizenberg on the 27 December 1911.

Pilot, Evelyn “Bok” Driver flew, in a seven and a half minute trip, a mailbag fastened to the back of his seat containing specially printed postcards for Muizenberg’s newly opened gabled post office at 184 Main Road. The Bleriot monoplane landed on Oldham’s Field near today’s False Bay Railway Station. 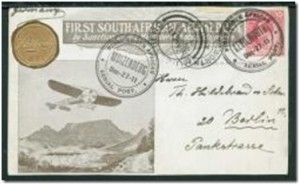 A function was held outside the Muizenberg Post Office at 10am today where first day covers and airmail stamps airmail stamps are on sale to commemorate the historic flight. 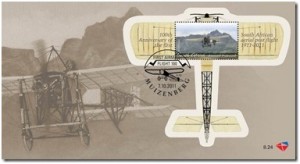 In upper Albertyn Road, diagonally behind the railway station and close to what was Oldham’s Field there is a motor garage building that has a close association with Muizenberg‘s aviation history. The Blue Bird Garage Market operates from the garage premises today. See photo below taken in 1929!

Thanks to Alan from a Whale of a Heritage Route for the information above.

More info on the South African Post Office and the 1st airmail delivery in South Africa found on  www.everything.co.za

The South African Post Office will commemorate this historical flight with a miniature sheet, an airmail postcard rate stamp and a first-day cover which will be issued on the 7th October 2011.The stunning, artisitic creation of South Africa’s World Post Day miniature sheet in the shape of a Blériot monoplane has been designed by Paul Treleven.

In 1911, the South African Minister of Posts and Telegraphs consented to the first conveyance of airmail between Kenilworth and Muizenburg. This made Muizenburg Post Office the first in Africa to receive airmail, an amazing achievement at the time.

On 27 December 1911, Evelyn (Bok) Driver, considered to be a superb “instinctive navigator” and also a pioneer of British Royal Mail Service, delivered by air, 729 of the special postcards to the Muizenberg Post Office. According to the Muizenberg Historical Conservation Society, the aircraft took off from the Kenilworth Race Course at 19:15 and landed at Oldham’s Field on the verges of Zandvlei in Muizenberg, a distance of almost 13km (approximately eight miles). The Postmaster at the time, PJ Hutchings, met the Blériot monoplane, received the postcards and presented the pilot with return post. The aircraft returned safely to Kenilworth at 20:10. The entire flight lasted a total of 7,5 minutes.