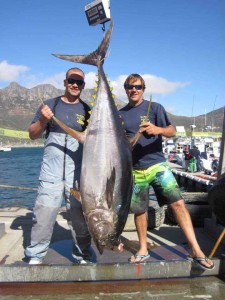 Things are hotting up in the oceans with the Spring and Summer season upon us.  Large Shoals of Yellowtail were seen down near Cape Point at the end of September and as October has progressed there have been some really nice yellowfin tuna starting to come in.  The images on the left show the 86.7 kg monster yellowfin brought in by Sean on 13 October, and the 92kg yellowfin brought in by Danie on 18 October 2012.

The South Easter is great for bringing the tuna in so after a couple of weeks of howling south-easter it looks as though there will be a cracker of a season. This is just in time for the Two Oceans Tuna Derby  which takes place from the 5th – 10th November 2012 in Hout Bay.  There should be some fantastic fishing and the first prize is a ski-boat! Some great daily prizes and category prizes .. but isn’t it all about the fish!?  Whatever your motivation if you still want a piece of the action get hold of the organisers quickly as all the boats are nearly booked but there a few spots available.  Contact: Atlantic Boat Club: 021 790 2499 E-mail: atboat@yebo.co.za 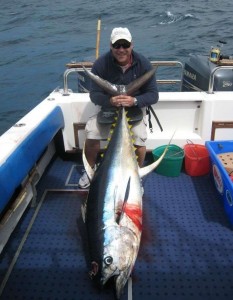 The Two Oceans Tuna Derby is hosted by the Atlantic Boat Club in Hout Bay and is open to all boats which depart from any recognised harbour between Cape Town and Gordon’s Bay but the fish will only be weighed in Hout Bay.  The scales for weighing open at 16h00 from Tuesday 6th November so this is a great time to get down to the Hout Bay harbour to see the action.  On the final day – Saturday 10 November the scales open at 15h00. We suggest visiting the Bay Harbour Market in Hout Bay whilst you are there.

There are daily prizes for the heaviest yellowfin or longfin tuna caught on the day for the top junior, top lady angler, to angler and top boat.

Sat 10 November is the final day and overall prizes will be awarded at the closing function in the following categories. 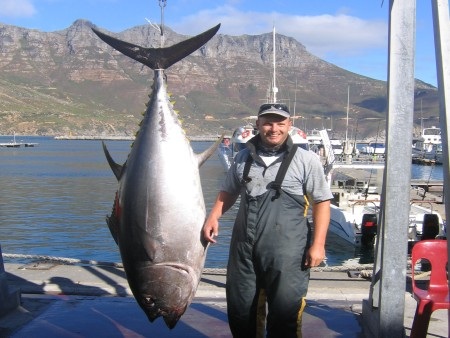 The next 3 to 4 months (November -Febrauary) are a great time for fishing so don’t delay in getting your bookings in book a conventional charter with the hopes of getting a yellowfin or longfin tuna out of some of the richest tuna fishing grounds in the world today.  A day in the deep is memorable as you go up against a tough fighting fish! 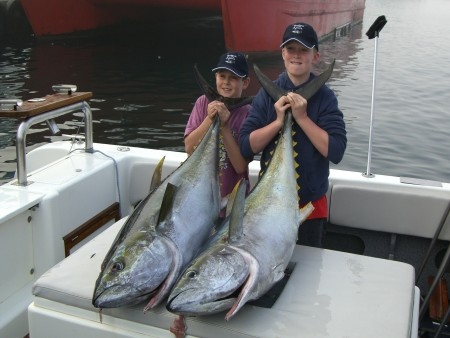 We recommend Hooked on Africa Fishing Charters in Hout Bay. They have their own vessels as well as access to other licenced, association member vessels to offer individual groups, corporate groups or VIP groups the opportunity to take on the tuna. Hooked on Africa: tel: 021 790 5332

If you are a competitor or visitor from out of the area, feel free to contact us for accommodation in Hout Bay during the Tuna Derby.