Signs of the Cape Peninsula

Probably the most photographed sign on the Cape Point Route is the one in the Cape of Good Hope Section of Table Mountain National Park at Cape Point which declares that the visitor posing behind the sign is standing at the most south-western point of the African continent! Which let’s face it, is pretty cool! 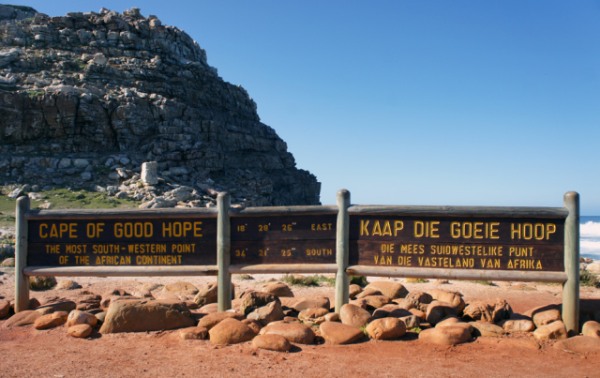 The second very commonly photographed sign is the directional sign-post at the viewpoint at the lighthouse. Visitors just love knowing how far away home is! 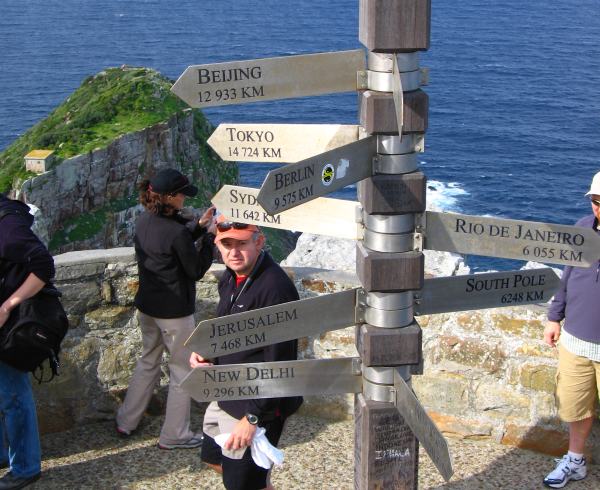 However on the road to get to Cape Point you may think we are living in an extremely dangerous place with all the warning signs you see on the road.  There are 3 access roads to the south peninsula – beautiful and over mountain passes so it is highly likely that you will see warnings about the sharp bends in the roads! (and did we mention rock falls?)

We have VERY dangerous driveways it seems.  The sign on the left was taken on Boyes Drive  – a scenic route between Lakeside and Kalk Bay which overlooks False Bay. On the scenic Chapman’s Peak Drive on the Atlantic coastline you have to look out for sharp bends, falling rocks and if that’s not all you need to worry about there are shark warning flags too! 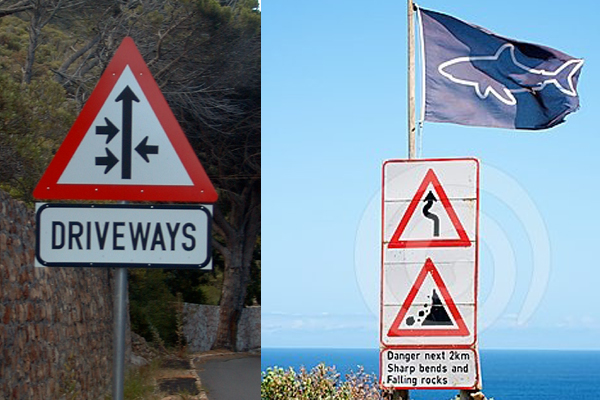 And then there is the danger of wildlife. You will be warned of all sorts of wildlife encounters. To start with you have to be careful of porcupines (not sure if it’s the quills that will get you or quite what ?!) and the incredibly dangerous leopard toads. Got to watch for those guys – worse than the Kruger it seems! 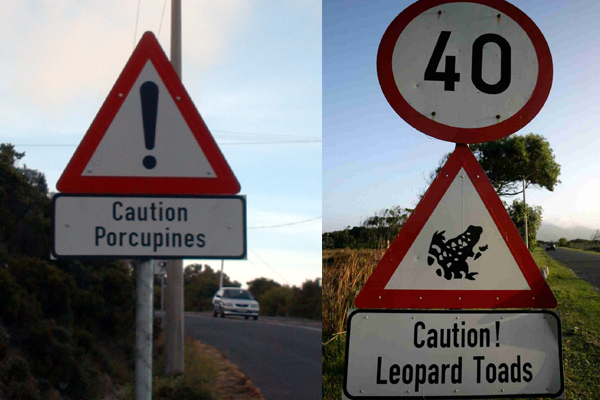 Actually the road sign warnings are really to protect these creatures from speeding motorists as both creatures can easily be squashed by vehicle traffic. The porcupines are not easily seen as they are nocturnal and the Leopard Toads migrate at certain times of the year (2 weeks in August, in the rain and at night!) so again are difficult to see and they are endangered creatures too.  We have other dangers in the animal kingdom though… penguins and baboons! 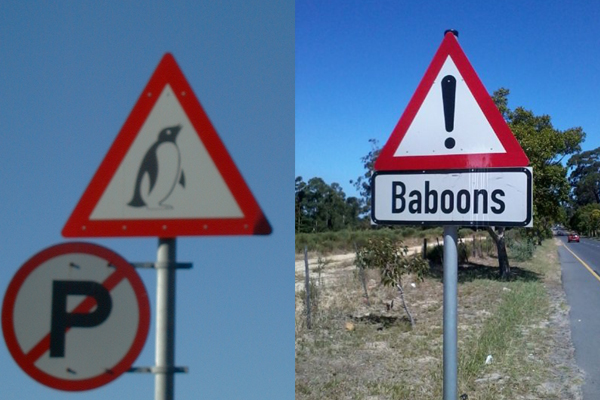 Again these signs are to protect the species. Penguins have reached endangered status due to declining numbers and there are only a few remaining Chacma Baboons in the Cape Peninsula.
You’ll come across other warning signs for penguins and baboons though.  Penguins may look cute but they WILL bite if you get too close! And make sure you crawl on your hands and knees to look for penguins under your car! The penguin colony at Boulders Beach is one of the main tourism attractions in the Cape Peninsula.

But back to the baboons. There are warning signs everywhere around the peninsula and for good reason. Their habitat for foraging has declined drastically through human development and being the smart creatures that they are, they have turned to the people who caused the problem in the first place as an easy source of food. Just like the penguins, they are cute and playful and human-like and make great photographic subjects. They will also be scrounging and begging for food. PLEASE do not feed them and as tempting as it is too lean out your windows for that super snapshot… you really don’t want them to get into your vehicle.

If you survive the baboons and make it to the leafy laned suburb of Noordhoek, you’ll have to watch for horses and their riders and the horses crossing the road. I must confess I am always amused  by the picture of the horse and the word saying riders… not sure who I should be watching out for actually!

I didn’t realise quite how dangerous my home was until I started writing this article and encountering danger warning signs on every bend of the road (sharp bends – don’t say you weren’t warned!) They say that Africa is not for the faint hearted, and this little corner of Africa seems testament to the saying. I’ll happily take my chances on the horses AND the riders, you can even give me the chance of the leopard toad or the porcupine. But living here we also have to deal with cannon firing (Simon’s Town is a naval base after all – there could be a war!) and we have to cope with daily fire danger warnings too! 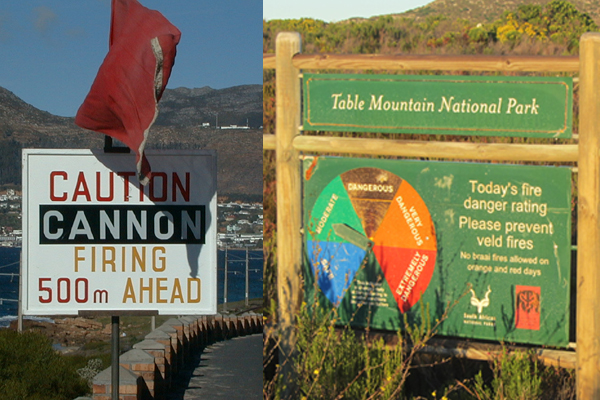 If the cannons and the fires don’t get you – you may have to cope with hazardous seas and treacherous ocean conditions.  Kalk Bay is a quaint fishing village and on the pier is a small warning sign, just to be prepared.  The shot on the left shows the sign that warns anglers and pedestrians that the ocean can be rough and the area is “hazardous”. The picture on the right shows justifies the warning sign.

And if you are venturing into the oceans here, there is a small chance that a shark might get you too! It is advisable to look out for the shark warning flags posted by the shark spotters who are on duty throughout the year and also a good idea to figure out what the flags mean. There are sign boards posted at the beaches but you don’t really want to be getting the flag status wrong!  Quick heads up – if the flag is white with a black shark on it… don’t get in the water!  Then you are advised to lie on the bench and read your book!

To be perfectly honest I’m not sure how we’ve survived this long as we live, work and play in the south-western tip of Africa.   We survive craziness every single day and that’s just driving to the office!  So if you’re not terrified yet, then contact us to help you plan an adventurous holiday! Be careful out there!