Sharks are an emotional issue for many, especially those who love the ocean. Great white sharks, as apex predators of the oceans, fascinate yet terrify people. The shark attack on a swimmer in Fish Hoek last week has stoked the fears, the myths and the media hype, surrounding sharks. As white shark capital of the world, getting the correct knowledge and information can reduce these encounters. 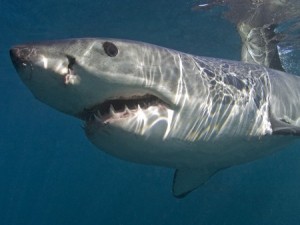 Misinformation abounds and with that a lot of misbehaviour, or perhaps I should say irresponsible behaviour.  Cape Point Route would like to clarify couple of myths around sharks and encourage safe swimming and surfing in our beautiful peninsula. Safety is paramount and we encourage people to make informed decisions.  We are not shark experts and we have the same fascination and fear factors as anyone else. How can one not be awed by the power and agility of these incredible creatures? They are an iconic and magnificent species. Yet it is also easy and acceptable to have a sense of fear. In truth however the legendary great white shark is far more fearsome in our imaginations than in reality.

What are your chances?
Great Whites are not actually mindless human killing machines.  According to the International Shark Attack File which has recorded shark attacks since 1580…. In 2009 a total of 2, 251 attacks have occurred worldwide with only 464 being fatal.  On average there are between 60 – 100 shark attacks worldwide with less than 1 per year being fatal. Even considering only people who go to beaches, a person’s chance of getting attacked by a shark is 1 in 11.5 million, and a person’s chance of getting killed by a shark is less than 1 in 264.1 million (Wikipedia).

Almost half these attacks are attributed to great white sharks, who are naturally curious predators and are in fact “ sample biting” then releasing their victims rather than preying on humans. I am not sure it helps when you lose a leg but it is more comforting to know that humans are not really on the great white shark’s menu! Franklin D. Roosevelt said in his first inaugural address “The only thing we have to Fear is Fear itself”. He was talking about that nameless, unreasoning, unjustified terror which paralyzes any efforts to move forward and reach practical solutions. 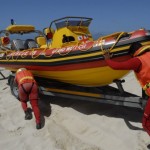 I am quite certain that Michael Cohen experienced a great deal of terror and fear on 28 Sept when the shark approached him from behind and took a bite of his legs. It was certainly NOT fear that drove Samaritans and heroes Douglas and Hugh to jump into the water in the presence of the shark to rescue Mr Cohen and drag him to shore. On the safety of the beach and with the aid of the shark spotters, medical personnel & the NSRI the team managed to stabilise him and save his life. See NSRI article here.. 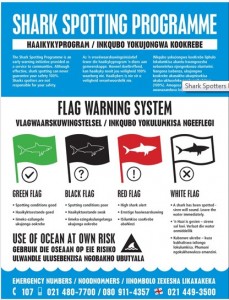 The shark warning systems are in place! The shark spotting programme operates 7 days a week, there are spotters on the mountain and on the beach and they operate with a flag system, communication via 2 way radio, a siren alarm and a social media presence which are all activated to help protect swimmers, surfers and paddlers, when a shark is present. It is one of the most efficient and well run warning systems in the world and it works. I for one and very happy to swim at Fish Hoek Beach and I will be back in the water when the ALL CLEAR sounds. I have total trust in the efficiency of the system – however if there is a shark warning I will not be going for a swim.  There is a very valid reason! The beaches have been closed until the area is clear.

Shark Spotting Programmes are operational at the following areas: 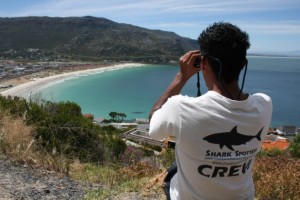 The Facts:
It is a well known fact that from late August and throughout the early part of summer the sharks move closer in-shore along the False Bay Coast in search of fish, sharks and rays which occur in this habitat. A warning was issued by the City of Cape Town on 30 August to bathers and surfers to adhere to the shark spotters sirens and leave the water when the sirens are activated.  It is for this reason that the great white shark cage diving trips in False Bay only operate during the winter season (approximately mid April – mid September) 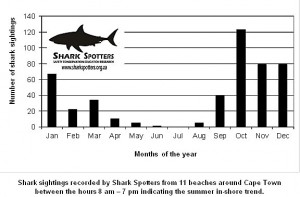 Shark safety tips:
People are reminded that no safety measure is 100% effective and that although the Shark Spotting Programme has been successful, it in itself is not 100% effective and remains vulnerable to human error, weather conditions and water quality issues.  The following tips can help reduce the risk of attack even further:

Shark Watchers:
Curiosity seekers are drawn to drama and this past weekend saw many shark watchers standing next to the shark spotters and looking for fins! Shark spotting is all the rage and traffic jams occurred as shark watchers vied with whale watchers trying to spot these ocean creatures. It was binocular heaven on Boyes Drive as fin spotting quickly became a new sport on the Cape Point Route. The beaches themselves were eerily quiet as the sharks were still spotted in the bay. The beaches remained closed and there is a high alert warning until further notice. 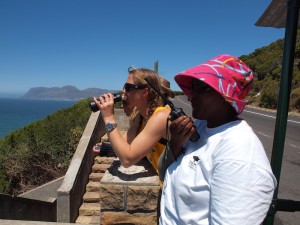 The Questions:
If the beach is closed, the flags are flying and the warnings have been issued- should officials interfere or is it individual choice? The victim last week was known to the shark spotters and he repeatedly ignored verbal warnings and signs. Mr Cohen made an informed decision to enter the water on 28 September 2011. 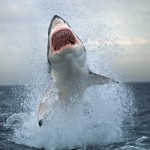 We encourage people to learn more about sharks and our ocean environment. One of the best ways to educate oneself is on a shark excursion with operators who will share their shark knowledge whilst witnessing these creatures in their natural environment (it’s a bit like driving through a game park with a knowledgeable ranger!) The shark cage diving season in False Bay has come to an end but it is still possible to do a white shark cage diving trip in Gansbaai. 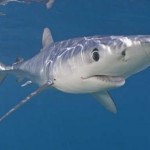 In the autumn and summer season you can experience the Mako and Blue Shark Cage Diving off Cape Point. Whilst not as big and bulky as the great whites, these shark cousins are equally magnificent and best experienced on this full day excursion which is ideal for naturalists. The Mako shark is the fastest shark in the sea and has been described as the Blue Dynamite! This is a full day excursion leaving Simon’s Town at 6am – but worth the early morning rise! Read more… 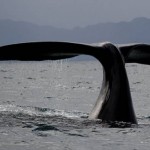 Fans of the ocean can discover more about the other marine wildlife in False Bay on the spectacular Ocean Marine Safari :a 4-5 hour trip, experiencing seals, dolphins, whales, penguins and various sea birds. There is a chance to see sharks on the trip but there is no shark cage diving on this trip. The ocean marine safari includes wildlife commentary and also historical commentary on the towns of Muizenberg, St James, Kalk Bay, Fish Hoek & Simon’s Town. Read more… 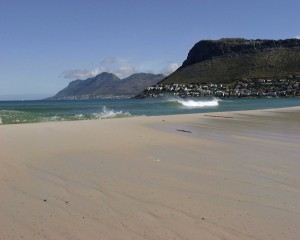 Residents of Fish Hoek and the surrounding areas know that we live alongside great white sharks and always have done.  We swim and surf and sail and kayak and we love it. We share the ocean with whales and seals and dolphins too. Our challenges are to find that balance between white shark conservation and recreational safety. Visitors come from all over the world to experience and witness penguins, baboons and sharks in their natural habitat. We are proud of that! We live in a place that has shark spotters and baboon monitors and even penguin crossings in an attempt to live harmoniously with the wildlife we are privileged to share our homes with.

Michael Cohen, the 42 year old victim of the shark attack last week is conscious and stable, a hospital spokesperson has confirmed. Cape Point Route wishes you a speedy recovery and successful rehabilitation. We hope that your story increases awareness of sharks and of safety in the hopes of peaceful co-existence.