PSSST! We are letting you into a secret. This is highly classified information that has been kept hidden and only known to a few select souls. There is a general perception that it is not a good idea to visit the Cape in winter. 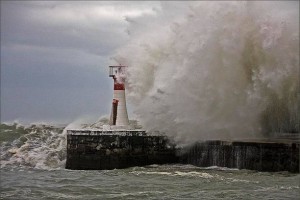 Ancient seafarers coined the term “Cape of Storms” and this turn of phrase has resulted in general avoidance behaviour during the winter months in the Cape. Well we have a confession – winter is actually one of the best times to visit the Cape Point Route, which runs from Hout Bay down the Atlantic coast to Cape Point itself and up the False Bay Coastline to Muizenberg. 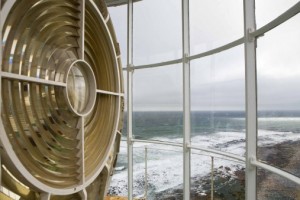 Since the first ships called in Table Bay just over 500 years ago, more than 450 known ships have been lost along the treacherous stretch of coastline known as the Cape Peninsula. It is not surprising therefore that there are 4 lighthouses in the Cape Point Route region. Lighthouses were generally built as navigational aids for steering marine craft, but they symbolize safety and beacons of truth and with approximately 1 500 working lighthouses in the world they are becoming attractions in their own right. 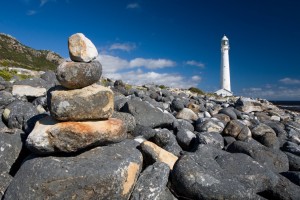 Slangkoppunt lighthouse in Kommetjie is the tallest cast iron lighthouse in South Africa and became operational in 1919. You can walk up the lighthouse, complete with prisms and lots of stairs and from the top are the most astounding views (weather dependent of course) and some excellent seabird viewing. 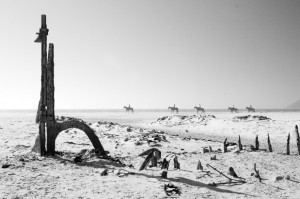 The coastline around the lighthouse has many reefs and headlands that stretch far out to sea, hence the vast number of ships that have come to grief here. The most famous shipwrecks are the Kakapo in 1900 which now lies on Long Beach and is accessible via a long and scenic wild walk along the beach; the SS Clan Munro that was wrecked a little to the north of the lighthouse in 1905 and the Boss 400 which can be visited by boat from Hout Bay. The Cape Point Route is a treasure trove for shipwrecks. 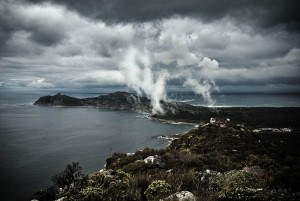 At Cape Point Nature Reserve there are 2 lighthouses – the original one built in 1860 and one of the most famous and most photographed lighthouses in South Africa due to its easy access by the funicular or the walkways at Cape Point. It stands at the highest peak and has become the lookout point for visitors to the reserve. The old lighthouse was often obscured by fog and mist so a new lighthouse was commissioned after the Portuguese luxury liner the Lusitaniaran aground on Bellows rock in 1911. Despite some phenomenal building challenges at the lower site, it was first lit in 1919 and today it is the most powerful lighthouse in South Africa. The new lighthouse can’t be seen from the viewpoint due to the shape of the promontory but there is a dramatic and seldom used walking trail to view the lighthouse. 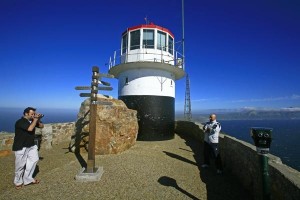 Some of the famous shipwrecks around Cape Point are the Lusitania itself, Le Napolean which ran aground in 1805 and is one of the only pirate ships to be shipwrecked on the South African coast and the Thomas T Tucker which was a military ship that hit Albatross Rock in 1942 and parts of which can be seen on the beach at Olifantsbos. In Smitswinkel Bay alone there are 5 shipwrecks that now make up an artificial reef and have attracted so much marine life that it has become one of the most popular winter dive sites. 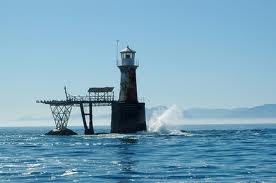 The final lighthouse is Roman Rock in Simon’s Town, which like the other 2 operational lighthouses also has a claim to fame in South African lighthouse lore, being the only one built on a rock. It is also the 3rd oldest lighthouse in South Africa being built in 1861 as a beacon to guide naval ships into Simon’s Town harbour. Incidentally Simon’s Town was established as the winter anchorage site for the Dutch East India Company as it was the best place to be in the Cape in winter – yet another great tip in your winter destination search!

To experience the lighthouses and shipwreck book a photographic Shipwreck and Lighthouse Tour – get the best shots in the best spots. Click here for more details. 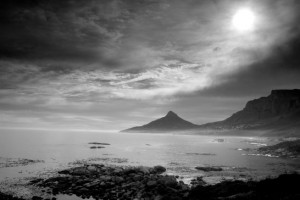 Simon’s Town is home to the South African Navy, a waterfront, a yacht club, a world famous penguin colony and some great restaurants. Simon van der Stel was right – the water in False Bay is calmer than Table Bay in winter and calm prevails. There are some superb water activities from Simon’s Town but check out our article on Aqua Action to find out more about seakayaking, boat trips, shark cage Diving, whale watching and deep sea fishing from Simon’s Town – all of which are best undertaken in winter! 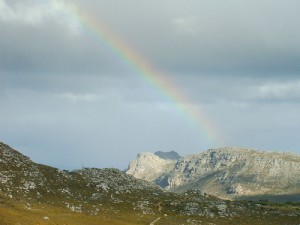 If the storm clouds loaded with raindrops are hanging over the Cape Point Route don’t think it is all doom and gloom. It is common to see striking rainbows dancing colourfully over Silvermine Nature Reserve. You could grab your binoculars and look for the pot of gold at the base – except technically you might find silver instead of gold! A crisp wintery walk on one of the short trails in Silvermine is one solution for getting the blood flowing and absorbing the winter treasures on the Cape Point Route. Winter walking and hiking rank highly as great winter activities. It is easy to access Silvermine or the mountains behind Kalk Bay. 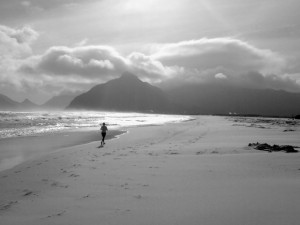 The wildness of a walk on Long Beach in Noordhoek, or a stroll along Fish Hoek beach on a blustery day with dogs and kids and lifesavers and surfskiers add wholesome dimensions to the meaning of life. If  winter walks seem too energetic on a stormy day then simply take in a thrilling live nature show at Cape Point or from Chapmans Peak Drive– complete with crashing waves and storm clouds racing across the sky. 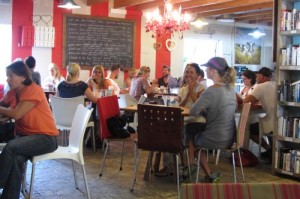 The beauty of getting outdoors early is the delight of retreating to a comfy cozy corner at a seaside restaurant or coffee shop. The smell of freshly brewed coffee after a fresh air start and the pleasure of sipping slowly on a warm beverage with a copy of your favourite book is a wee slice of fantasy.  Fireside Restaurants exist in abundance on the Cape Point Route and we suggest coming down to discover this for yourself and to enjoy a glass of red wine too! Needless to say we usually prefer the term “Tavern of the Seas” to Cape of Storms as that implies a warm pub with a convivial atmosphere – and conveniently there are plenty of excellent taverns to warm up and refresh after a lighthouse or shipwreck extravaganza, whale watching, diving, hiking or kayaking.

It is easy to drive along the stunning coastline of the Cape Point Route via a network of excellent roads to visit these attractions. It’s a wonderful way to spend a couple of days and there is a huge variety of accommodation, refreshment and activity options. And that seafarers or lundlubbers is the truth – the Cape Point Route in winter is fabulous for a mid-winter break and there are wonderful bargains to be had.

For more details on how to enjoy the Cape of Storms this winter please call the Cape Point Route for information or contact us to Book your mid-winter break NOW. Click on the names of the establishment to view more details.